In 2004, Tom Nix negotiatied with Union Bank to purchase Nix Check Cashing Services.  The Comptroller of Currency (OCC) refused to grant permission. Tom expresses his thoughts on this devastating blow resulted in negative attitudes of the consumer groups.

Unfortunately we were also dealt a devastating blow in March of 2004. The office of the Comptroller of Currency (OCC) refused to grant permission for Union Bank to purchase Nix Check Cashing. Our government let a solution to bringing full-service over-the-counter banking to underserved communities die and wither away. We would have had 47 full-service bank branches by the end of 2004 and an acquisition strategy that would've added hundreds more. Our competitors would've copied our successful model and underserved communities all over the country would have benefited from it. The OCC’s decision ensured that no bank would ever duplicate the experience Union Bank had with Nix Check Cashing. The OCC did not have the courage to do the right thing because it would have been criticized by many shortsighted community groups. The OCC felt they were not about to make a decision that would allow banks that left the low-income communities decades ago come back as check cashers! They felt it would make them look bad. They cared more about how they looked than better serving millions of people. They felt they would be criticized by well-meaning but completely ignorant and narrow minded community groups that continued to hope that somehow banks would launch an unprofitable business model across the country in low income communities. These are the same community groups that are so far removed from the realities of what it is like to live paycheck to paycheck that they continue to scorn companies like Nix Check Cashing that fill important needs in a fair manner at affordable prices.

Consumer groups don't realize that banking is not for everyone and the cost of doing business with a bank after adding in a few bounced checks per year is comparable to using a check casher. Plus they discard peoples right of freedom of choice because it happens not to be there choice. Many people prefer the simple cash and carry approach that does not require balancing a bank statement every month and people living paycheck to paycheck cannot wait a week to receive their money because banks put a hold on checks drawn against accounts that do not have funds to cover the check. There are also a sizable percentage of people living in low income communities that are listed on ChexSystems and cannot get a bank account. Union Bank's nest egg account provided these people with a way to work back into traditional banking. The OCC's decision insured people would have a difficult time accessing traditional banking services when they began moving up the financial ladder. It was a crying shame!

It is now 2012 and low-income communities are still not well served by the banking industry and never will be because banks cannot make money with the traditional banking model. It is economically unfeasible! The government making banks open unprofitable branches in low income communities will have similar results as requiring banks to make home loans to people that can’t qualify or afford them. Plus Banks do not offer all of the services used by low income people such as inexpensive money orders, money transfer, bus passes, DMV registration services, fax services and prepaid mobile phone cards. These services along with check cashing and payday loans would have created a platform for banks to be profitable on a lower volume scale so they could provide traditional banking services to those consumers that could use it. We could have changed America and it was terribly disappointing to have been refused the opportunity to do so.

In March of 2005 I received a call from Hartnack. He said I have bad news, I am leaving the bank. I said when? He said today. I said oh shit. He asked me to keep it quiet until it became public knowledge and we agreed to meet the next morning at Norms on Pacific Coast Highway near Crenshaw for breakfast where he would give me the details. I was literally sick to my stomach. Hartnack and I were planning to take another run at the OCC when the current director left the organization. We hope the new director would be better grounded in the realities of the marketplace and more courageous. I knew in my heart that Union Bank would not go forward with our plans without Hartnack. He had the passion, vision and courage necessary to ultimately prevail and truly cared about the underserved community. No one could take his place.

We met the next morning where it all started. He told me the confidential story about what happened at the top of Union Bank. He also told me he was going to become the vice chairman of US Bank and maybe somehow we could team up in the future to accomplish the mission. We both knew that was just wishful thinking. We were like 2 Army generals who had just lost the war having breakfast talking about what could've been. This is a picture of Hartnack and me at our last breakfast. 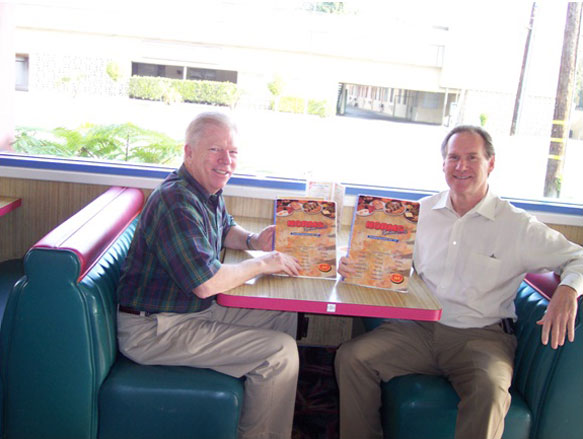 Within a few months of Hartnack leaving Union Bank, Thom Branch retired, Yolanda Brown retired and all of the people at the Union Bank of Nix were relocated to new jobs within the bank. We had no direct contact in the bank. I met with the new Vice Chairmen of the bank, Phil Flynn, over lunch. He told me the bank had retained consultants to help them develop a new strategic plan for the entire bank and the future of Nix could not be certain until it was completed. He said we could have one of 3 outcomes:

I asked him who will be our direct contact in the bank and will anyone in the bank take Hartnack and Thom Branch’s seats on the Nix board of directors. He said I can't answer these questions until the strategic plan was finished and they knew what direction the bank would take. He said just run your business and continue everything you're doing for Union Bank and if you need to talk to someone about any issues call me. I never called him.

We bumped along for many months and during this period exercised our option to repurchase one half of the banks ownership in our company bringing them down to a 20% ownership stake. In August of 2006 I finally got a call from George Ramirez, the Market President for the Los Angeles area. George and I had a good relationship and met for lunch to discuss the future. He said he was now responsible for Nix Check Cashing and would be my point of contact. He said the bank was happy with our relationship as it was but did not plan on   expanding it or acquiring us. They had chosen option number 2. George invited me to the unveiling of their new corporate strategy to be held the following month. The new focus was to shift away from the community banking model Hartnack had engineered and begin focusing on high net worth individuals and commercial accounts. It had a familiar ring and I knew there was no place for Nix Check Cashing in the long run. I talked to Pam and my sons Bill and Tom and they all agreed. Darline, Randy and I decided we would put the company up for sale in 2007 after our 2006 year-end financials were completed.

This is a photo of our management team at our last companywide managers meeting in 2006 celebrating our 40th anniversary. I knew it would be our last photo opportunity. 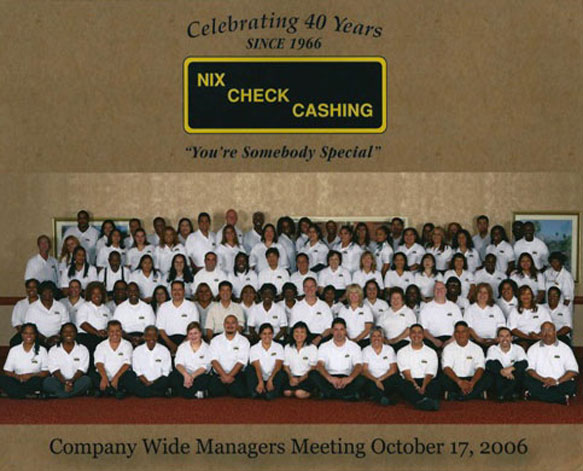